0
hello@greedy-panda.com
Rice, rice and more rice, we look in depth at the different and most common varities available

Thanks to technology that has eliminated the human labour factor in rice-growing, the U.S. is the world’s 12th largest exporter of rice. Arkansas, northern California and Texas are leading growers, with mega-farms that use laser technology from scaling the fields to removing broken grains from the milled rice. As opposed to dozens of human labourers, fields are seeded by airplane, and harvested by a single combine operator, followed by a tractor alongside it that receives the harvested rice and delivers it to waiting trailers. Most domestic rice grown (60%) is consumed domestically as table rice, in restaurants or into food products: made into beer, rice mixes and pet food. Some is exported as well: California alone exports some 400,000 tons of rice to Japan, South Korea and Taiwan in Asia; Turkey, Syria and Jordan in the Middle East; and throughout the Pacific, South America and Europe. 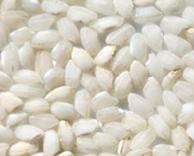 This medium-length, round-grained rice is named after the town of Arborio, in Italy’s Po Valley, where it is grown. The grains have a more tan colour with a characteristic white dot at the center of the grain. Primarily used in risotto, Arborio rice develops a creamy texture around a chewy center and has exceptional ability to absorb flavours. The creaminess comes from a high starch content. Arborio is a japonica cultivar, the same variety that produces the other “sticky rices,” including sweet rice.

Basmati rice
An aromatic, long-grain, slender, non-glutinous rice from India and Pakistan. When cooked it swells only lengthwise, resulting in long slender grains that are very dry, light and separate-not sticky. Basmati has been cultivated for centuries at the foot of the Himalayan mountain ranges. The rice is long-grain and scented; literally translated from Hindi, it means “queen of scents” or “pearl of scents.”

A short-grain rice grown at 8,000 feet in the Himalayan Kingdom of Bhutan, and the chief rice in the Bhutanese diet. It is irrigated with a 1,000-year-old glacier rich in trace minerals, that provides a nutty/earthy flavour. It has a beautiful red russet colour when harvested, that turns pinker when cooked; the cooked texture is soft. A long-grain red rice is also grown.

Black in colour when raw, deep purple when cooked, black rice
was once reserved for the ancient Chinese emperors, earning it the name “forbidden rice.” It has a deep, nutty taste, is high in iron and fibre. It pairs beautifully with all cuisines and can be enjoyed steamed plain, in a pilaf, stir-fried or with salad. It makes a spectacular Thai rice pudding with coconut milk. Unlike other black rices from Asia, “forbidden rice” is not glutinous or rough. Chinese scientific research indicates that black rice is beneficial to the kidneys, spleen, stomach, eyes and blood circulation.

The light brown colour/dark beige of brown rice is from the bran. Brown rice takes about twice as long to cook as white rice. Any rice – long-grain, short-grain rice or sticky rice – may be harvested and milled as brown rice. Because of the Asian aesthetic for finely-polished white rice, brown rice was traditionally denigrated, associated with poverty and wartime shortages, and in the past was rarely eaten except by the sick, the elderly and as a cure for constipation. Today, it is more expensive than common white rice, partly due to its low consumption and much shorter shelf life (because the oil in the germ will turn rancid).

Carnaroli rice
Carnaroli is the most prized of all Italian rices, is a “superfino” Italian rice used to make risotto. It is produced in Novara and Vercelli, two towns in the area between Milan and Turin in northwest Italy, and today is also grown at the foothills of the Andes Mountains in South America. It is prized for its bold white kernel, uniform starch release and firmness-each grain maintains its distinct shape in the risotto while continuously absorbing liquid, producing an exceptionally creamy result.

Jasmine rice
Grown in Thailand, jasmine is an aromatic long grain rice that has a distinctive jasmine aroma after cooking and a faint flavour similar to that of popcorn. The cooked grains are soft, moist and cling together. Jasmine is the most popular rice in Thailand and South-east Asia. This excellent white rice cooks in similar fashion to basmati but possesses a rounder, more starchy grain (i.e., it’s sticky, where basmati is not). It can be interchanged with white basmati rice in recipes. It naturally lends itself to coconut dishes and seafood dishes. Jasmine rice is a good source of B vitamins and complex carbohydrates.

Japonica rice
Japonica rice grows throughout the world in temperate and mountainous reasons. It is the moist, sticky, bright white rice used in sushi – medium-grain rices are moister and more glutinous (sticky) than long-grain rices, and they are ideal for Mediterranean and Asian dishes that require stickiness, like risotto, paella and sushi. The kernel is two to three times longer than it is wide. The two japonica varieties favored by the Japanese are akita komachi and koshihikari.

Sticky rice (or glutinous/sweet rice)
A group of rices that are a sub-species of the cultivar Oryza sativa, that produce short-grained rices that are especially glue-like when cooked. Also called botan rice (after a particular brand), pearl rice, sweet rice and waxy rice.

Sushi rice
Refers to a type of medium-grain rice specifically used for sushi. Particular varieties like Calrose, grown in California and used at most U.S. sushi bars, and koshihikari, a premium medium-grain rice preferred in Japan, are two examples.

Vialone nano rice
Vialone Nano is a “semifino” Italian rice from the Verona area of Italy. Its medium-large, semi-long, rounded grains are capable of absorbing twice their own weight in liquid, making it ideal for creamy risottos. Cooking time is about 15 minutes, much faster than arborio and carnaroli, the other rices preferred for risotto (which are both designated “superfino,” or extra-fine); and it is also difficult to overcook vialone nano. The Consortium for the Protection of Vialone Nano Veronese was created in 1979, and the rice has an I.G.P. (Indicazione Geografica Protetta, or Protected Geographic Classification). Vialone Nano is a new rice, created in the 1930s, a hybrid of the Vialone strain; “nano” means dwarf.

White rice
Regular-milled white rice, often referred to as “white” or “polished” rice, is the most common form of rice. The outer husk is removed and the layers of bran are milled until the grain is white. While removing the bran and germ makes white rice more tender and delicate, it removes much of the nutrients as well. To compensate, converted rice uses a steam process to retain some of the nutrients.

Wild rice
Wild rice is a member of the Poaceae family, genus Zizania; it is a cousin to true rice. Like other rice, it grows in shallow water but instead of being cultivated, as the name indicates, it grows wild in small lakes and slow-flowing streams. There are four species of wild rice, three native to North America: Northern wild rice (Zizania palustris) from the Great Lakes region (it is the state grain of Minnesota), Wild rice (Zizania aquatica), which grows in the Saint Lawrence River and on the Atlantic and Gulf coasts; and Texas wild rice (Zizania texana), which grows along the San Marcos River in central Texas. The fourth species is native to China, Manchurian wild rice (Zizania latifolia, also called Zizania caduciflora).

How do you feel about this?

The foodie blog for all things rice and more

We love to eat, travel, and eat some more! In particular we love all things rice. We literally live and dream rice and helped propel a rice cooker awakening in the UK, Europe and the USA!

Search for a recipe

The inner bowls of a rice cooker